As a business professional — heck, even as a run-of-the-mill human — there are plenty of tech terms you hear every day. But do you know what any of these terms actually mean?

But odds are, you probably don’t. You most likely understand that it gets you from Point A to Point B, but the journey there is a complete mystery.

So let’s take a few moments to discuss a few everyday tech terms and clear up that mysterious journey for you.

LTE stands for Long Term Evolution, and when you think of LTE, your natural reaction is probably to drift to thoughts of 2G, 3G, and 4G. What’s LTE and how does it differ from all the G’s …?

Digital Trends says that it’s important to look at LTE in a general way and to consider it a path followed to achieve 2G, 3G, or 4G speeds. In other words, don’t necessarily think of each G as a separate entity — but rather as a natural progression to “improving wireless broadband speeds.”

Many people have heard of Bluetooth, and they typically associate it with a smartphone and its ability to connect to another “thing” (like a car or another smartphone). But what exactly is Bluetooth?

Well, it’s exactly that — a low-power wireless connection that one device uses to connect to another device. There are two types of Bluetooth connections — Bluetooth BR/EDR and Bluetooth LT.

Bluetooth LE is different than BR/EDR because it relies on multiple topologies to create different connections — P2P, broadcast, and mesh.

Again, P2P is the everyday connection you’re the most familiar with — but in the case of LE, it’s most likely used with more modern connected devices (like with a wearable connected to your phone).

RFID refers to a small chip that carries data. It stands for Radio-Frequency Identification, and these chips are typically used to track items (like in a store or warehouse or even at a DVD kiosk like Redbox and an amusement park like Disneyland).

These tags can be read by a scanner from a few feet away and promote greater efficiency. RFID is a technology that’s been around for a while, but its presence in the business world is a recent one.

In the case of Wi-Fi, data is transmitted via radio waves, and Life Noggin says this process is very similar to how your car’s radio picks up a signal.

Radio waves are constantly sent back and forth between your wireless router and connected device. It’s a two-way conversation that is vulnerable to outside interference (which is why these radio waves are sent at a specific frequency of 2.4 GHz or 5.0 GHz).

It’s important not to overanalyze what Wi-Fi is. It’s simply a way to package and send data wirelessly through radio waves.

If you’d like to learn more about tech terms, take a look at our recent articles. We have content on SIP Trunking, the difference between hosted PBX and on-premise PBX, and VoIP. 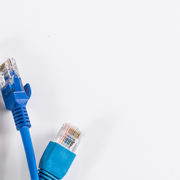 What is the difference between Cat5 and Cat6 cables?

What’s the deal with unified communications?